The ideal number of workers in Jest

Peterbe.com The ideal number of workers in Jest
Home Archive About Contact
Menu ▼

tl;dr; Use --runInBand when running jest in CI and use --maxWorkers=3 on your laptop. 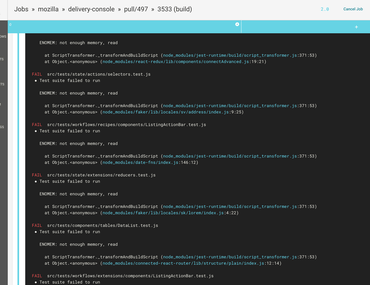 We have a test suite that covers 236 tests across 68 suites and runs mainly a bunch of enzyme rendering of React component but also some plain old JavaScript function tests. We hit a problem where tests utterly failed in CircleCI due to running out of memory. Several individual tests, before it gave up or failed, reported to take up to 45 seconds.
Turns out, jest tried to use 36 workers because the Docker OS it was running was reporting 36 CPUs.

After forcibly setting --maxWorkers=2 to the jest command, the tests passed and it took 20 seconds. Yay!

But that got me thinking, what is the ideal number of workers when I'm running the suite here on my laptop? To find out, I wrote a Python script that would wrap the call CI=true yarn run test --maxWorkers=%(WORKERS) repeatedly and report which number is ideal for my laptop.

After leaving it running for a while it spits out this result:

The conclusion is vague. There is some benefit to using some small number greater than 1. If you attempt a bigger number it might backfire and take longer than necessary and if you do do that your laptop is likely to crawl and cough.

Previous:
Inline scripts in create-react-app 2.0 and CSP hashes 05 October 2018
Next:
Fancy linkifying of text with Bleach and domain checks (with Python) 10 October 2018

Related by category:
How much faster is Redis at storing a blob of JSON compared to PostgreSQL? 28 September 2019 Python
How to "onchange" in ReactJS 21 October 2015 ReactJS
Best practice with retries with requests 19 April 2017 Python
How to create-react-app with Docker 17 November 2017 ReactJS
Fastest way to find out if a file exists in S3 (with boto3) 16 June 2017 Python