This was one of those late-evening-after-the-kids-are-asleep project. Followed by some next-morning-sober-readme-fixes-and-npmjs-paperwork.

It's a little Node script that will open https://fast.com with puppeteer, and record, using document.querySelector('#speed-value') what my current Internet speed is according to that app. It currently only works on OSX but it should be easy to fix for someone handy on Linux or Windows.

You can either run it just once and get a readout. That's basically as useful as opening fast.com in a new browser tab.
The other way is to run it in a loop howsmywifi --loop and sit and watch as it tries to figure out what your Internet speed is after multiple measurements.

The whole point of this was for me to get an understanding of what my Internet speed is and if I'm being screwed by Comcast. The measurements are very erratic and they might sporadically depend on channel noise on the WiFi or just packet crowding when other devices is overcrowding the pipes with heavy downloads such as video chatting or watching movies or whatever. 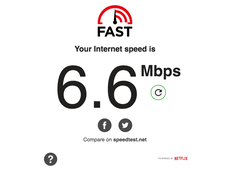 As a bonus, it will take a screenshot (if you pass the --screenshots flag) of the fast.com page each time it has successfully measured. Not sure what to do with this. If you have ideas, let me know.

However, there's just something about the speedtest Flash banner ads that makes me trust Fast.com better :)

Related by keyword:
NodeJS fs walk() or glob or fast-glob 31 August 2019
How to install Node 12 on Ubuntu (Eoan Ermine) 19.10 08 April 2020
How I stopped worrying about IO blocking Tornado 18 September 2012
How to use minimalcss without a server 24 April 2020
An awesome snippet to web performance test a page programmatically 01 October 2018