The paper is here (PDF) and the code is here: https://github.com/alex-sherman/deco.

This library is based on something called Pydron which, if I understand it correctly, is still a piece of research with no code released. ("We currently estimate that we will be ready for the release in the first quarter of 2015.")

Apart from using simple decorators on functions, the big difference that deco takes, is that it makes it really easy to get started and that there's a hard restriction on how to gather the results of sub-process calls'. In deco, you pass in a mutable object that has a keyed index (e.g. a python dict). A python list is also mutable but it doesn't have an index. Meaning, you could get race conditions on mylist.append().

"However, DECO does impose one important restriction on the program: all mutations may only by index based."

Just look at this example:

And when run, you clearly expect it to take 15 seconds:

And when run, it should be less than 15 seconds:

About the order of execution

Let's put some logging into that slow() function above.

Run the example a couple of times and note that the order is not predictable:

That probably don't come as a surprise for those familiar with async stuff, but it's worth reminding so you don't accidentally depend on order.

Remember the run() function in the example above? The @synchronized decorator is magic. It basically figures out that within the function call there are calls out to sub-process work. What it does it that it "pauses" until all those have finished. An alternative approach is to call the .wait() method on the decorated concurrency function:

That works the same way. This could potentially be useful if you, on the next line, need to depend on the results. But if that's the case you could just split up the function and slap a @synchronized decorator on the split-out function.

It might be tempting to not set the @synchronized decorator and not call .wait() hoping the work will be finished anyway somewhere in the background. The functions that are concurrent could be, for example, functions that generate thumbnails from a larger image or something time consuming where you don't care when it finishes, as long as it finishes.

When you run it, you don't get an error:

But if you dig deeper, you'll find that it never actually executes those concurrent functions.

If you want to do fire-and-forget you need to have another service/process that actually keeps running and waiting for all work to be finished. That's how the likes of a message queue works.

multiprocessing.Pool automatically, as far as I can understand, figures out how many concurrent jobs it can run. On my Mac, where I have 8 CPUS, the number is 8.

This is easy to demonstrate. In the example above it does exactly 3 concurrent jobs, because len(list('123')) == 3. If I make it 8 items, the whole demo run takes, still, 5 seconds (plus a tiny amount of overhead). If I make it 9 items, it now takes 10 seconds.

How multiprocessing figures this out I don't know but I can't imagine it being anything but a standard lib OS call to ask the operating system how many CPUs it has.

You can actually override this with your own number. It looks like this:

So that way, the operating system doesn't get too busy. It's like a throttle.

It generates 100 different thumbnails from a very large original JPG. Running this on my macbook pro takes 8.4 seconds but the individual times was a total of 65.1 seconds. The numbers makes sense, because 65 seconds / 8 cores ~= 8 seconds.

But, where it gets really interesting is that if you remove the deco decorators and run 100 thumbnail creations in serial, on my laptop, it takes 28.9 seconds. Now, 28.9 seconds is much more than 8.4 seconds so it's still a win to multiprocessing for this kind of CPU bound work. However, stampeding herd of doing 8 CPU intensive tasks at the same time can put some serious strains on your system. Also, it could cause high spikes in terms of memory allocation that wouldn't have happened if freed space can be re-used in the serial pattern.

Here's by the way the difference in what this looks like in the Activity Monitor: 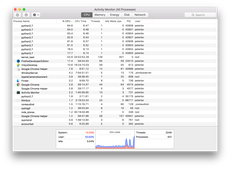 Same work but in serial 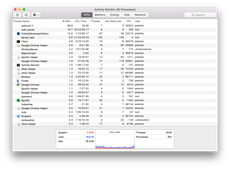 Let's do this again with a network bound task. Let's download 100 webpages from my blog. We'll do this by keeping an index where the URL is the key and the value is the time it took to download that one individual URL. This time, let's start with the serial pattern:

(Note! I ran these two experiments a couple of times so that the server-side cache would get a chance to clear out outliers)

When run, the output is:

Now, let's add the deco decorators, so basically these changes:

And the output this time:

So, instead of it having to take 39.8 seconds it only needed to take 5 seconds with extremely little modification. I call that a win!

Easy; actually build something that uses this.

I've been waiting for something like this for years! ...and this is much better than I was hoping for.

I've been waiting for something like this for years! ...and this is much better than I was hoping for. Thank you Alex.

On Windows, one should add to imports:

and before calling "run", add:

This looks interesting but I've really appreciated the flexibility of `concurrent.futures` for doing concurrent work in Python. Specifically, I find the `as_completed ` method makes it easy to write code that handles lots of work in parallel without having to handle the results in-order or block waiting for everything to finish: http://pythonhosted.org/futures/#concurrent.futures.as_completed .

Uh?! Can you do fire-and-forget with concurrent.futures?!

Sure, you just call `submit` on the `Executor` you're using:
http://pythonhosted.org/futures/#concurrent.futures.Executor.submit

...and then you can either call `wait` on it to wait for everything to finish, or use it in a with statement, which does that for you.

Wowza! Hot stuff, thanks for sharing :)

The github https://github.com/alex-sherman/deco and your article do not mention which versions on Python are required.
Do you have info on that?

----
How multiprocessing figures this out I don't know but I can't imagine it being anything but a standard lib OS call to ask the operating system how many CPUs it has.
----

There exists a cpu_count() function. Useful if you want to limit yourself to say, 25% of available cores. I guess it simply calls nprocs on unix.

From the docs: (https://docs.python.org/2/library/multiprocessing.html)
multiprocessing.cpu_count()
Return the number of CPUs in the system. May raise NotImplementedError.

so I guess a try..except is in order if you want to use this yourself. Not sure when the NotImplemented triggers, maybe it's a OS-dependent thing.

I'm so looking forward to using this module. However, I have to use python3 and I'm pretty sure deco is not ready for python3 yet:

It should be easy enough to not use iteritems.
Is there a plan to make deco compatible with both python2 and python3?

In fact, changing the one use of iteritems to items seems to be all it takes to make deco run in python3

FYI: I'm having trouble with your first example on Windows 10. https://github.com/alex-sherman/deco/issues/55

Related by category:
How much faster is Redis at storing a blob of JSON compared to PostgreSQL? 28 September 2019 Python
Best practice with retries with requests 19 April 2017 Python
Fastest way to find out if a file exists in S3 (with boto3) 16 June 2017 Python
Interesting float/int casting in Python 25 April 2006 Python
Fastest way to unzip a zip file in Python 31 January 2018 Python

Related by keyword:
Concurrent Gzip in Python 13 October 2017
Concurrent download with hashin without --update-all 18 December 2018
Why didn't I know about machma?! 07 June 2017