Programmatically control the matrix in a GitHub Action workflow


If you've used GitHub Actions before you might be familiar with the matrix strategy. For example:

Let's explain this with a scoped example

You can make a workflow run on a schedule, on pull requests, on pushes, on manual "Run workflow", or as a result on some other workflow finishing.

First, let's set up some sample on directives:

The workflow_dispatch makes it so that a button like this appears: 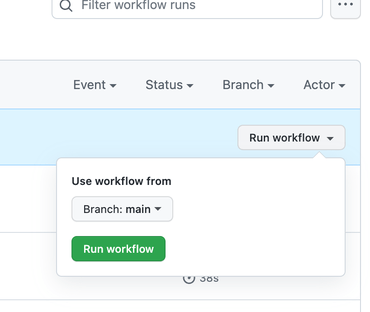 The schedule, in this example, means "At every 4th minute"

And workflow_run, in this example, means that it waits for another workflow, in the same repo, with name: 'Build and Deploy stuff' has finished (but not necessarily successfully)

For the sake of the demo, let's say this is the rule:

It's arbitrary but it could be a lot more complex than this.

What's also important to appreciate is that you could use individual steps that look something like this:

But the rest of the workflow is realistically a lot more complex with many steps and you don't want to have to sprinkle the line if: ${{ github.event_name == 'workflow_dispatch' }} into every single step.

The solution to avoiding repetition is to use a job that depends on another job. We'll have a job that figures out the array for the matrix and another job that uses that.

First we inject a job that looks like this:

Now we can write the "meat" of the workflow that uses this output:

I've extrapolated this demo from a more complex one at work. (this is my defense for typos and why it might fail if you verbatim copy-n-paste this). The bare bones are there for you to build on.

In this demo, I've used actions/github-script with JavaScript, because it's convenient and you don't need do to things like actions/checkout and npm ci if you want this to be a standalone Node script. Hopefully you can see that this is just a start and the sky's the limit.

Thanks to fellow GitHub Hubber @joshmgross for the tips and help!


Rome is a new contender to compete with Prettier and eslint, combined. It's fast and its suggestions are much easier to understand.

I have a project that uses .js, .ts, and .tsx files. At first, I thought, I'd just use rome to do formatting but the linter part was feeling nice as I was experimenting so I thought I'd kill two birds with one stone.

You get this nice prompt after running npx rome init the first time:

Editing the rome.json's JSON schema works in VS Code

I don't know how this magically worked, but I'm guessing it just does when you install the Rome VS Code extension. Neat with autocomplete!

Things that didn't work so well

Almost all things that I'm going to "complain" about is down to usability. I might look back at this in a year (or tomorrow!) and laugh at myself for being dim, but it nevertheless was part of my experience so it's worth pointing out.

It's confusing what is what. If lint means checking without modifying, what is check then? I'm guessing rome format means run the lint but with permission to edit my files.

What is rome format compared to rome check --apply then??

I guess rome check --apply doesn't just complain but actually applies the things it spots. So what is rome check --apply-suggested?? (if you're reading this and feel eager to educate me with a comment, please do, but I'm trying to point out that it's not user-friendly)

How do I specify wildcards?

Unfortunately, in this project, not all files are in one single directory (e.g. rome check src/ is not an option). How do I specify a wildcard expression?

Cool, but how do I do all .ts files throughout the project?

Clearly, it's not this:

...because bash will include all the files from node_modules/**/*.ts.

In the end, I ended up with this (in my package.json):

There's no documentation about how to ignore certain rules

Yes, I can contribute this back to the documentation, but today's not the day to do that.

It took me a long time to find out how to disable certain rules (in the rome.json file) and finally I landed on this:

Much better than having to write inline code comments with the source files themselves.

However, it's still not clear to me what "recommended": true means. Is it shorthand for listing all the default rules all set to true? If I remove that, are no rules activated?

The rome.json file is JSON

JSON is cool for many things, but writing comments is not one of them.

For example, I don't know what would be better, Yaml or Toml, but it would be nice to write something like:

Nextjs and rome needs to talk

When create-react-app first came onto the scene, the coolest thing was the zero-config webpack. But, if you remember, it also came with a really nice zero-config eslint configuration for React apps. It would even print warnings when the dev server was running. Now it's many years later and good linting config is something you depend/rely on in a framework. Like it or not, there are specific things in Nextjs that is exclusive to that framework. It's obviously not an easy people-problem to solve but it would be nice if Nextjs and rome could be best friends so you get all the good linting ideas from the code Nextjs framework but all done using rome instead.

How to count the most common lines in a file

I wanted to count recurring lines in a log file and started writing a complicated Python script but then wondered if I can just do it with bash basics.
And after some poking and experimenting I found a really simple one-liner that I'm going to try to remember for next time:

You can't argue with the nice results :)

It's very possible that there's a tool that does this, but if so please enlighten me.
The objective is to find which of all your various projects' node_modules directory is eating up the most disk space.
The challenge is that often you have nested node_modules within and they shouldn't be included.

The command uses fd which comes from brew install fd and it's a fast alternative to the built-in find. Definitely worth investing in if you like to live fast on the command line.
The other important command here is rg which comes from brew install ripgrep and is a fast alternative to built-in grep. Sure, I think one can use find and grep but that can be left as an exercise to the reader.

Now, if I want to free up some disk space, I can look through the list and if I recognize a project I almost never work on any more, I just send it to rm -fr.

Spot the JavaScript bug with recursion and incrementing


What will this print?

The answer is it will print

The bug is the use of a "postfix increment" which is a bug I had in some production code (almost, it never shipped).

The solution is simple:

That's called "prefix increment" which means it not only changes the variable but returns what the value became rather than what it was before increment.

The beautiful solution is actually the simplest solution:

Now, you don't even mutate the value of the iterations variable but create a new one for the recursion call.

All in all, pretty simple mistake but it can easily happen. Particular if you feel inclined to look cool by using the spiffy ++ shorthand because it looks neater or something.


Because I always end up Googling this and struggling to find it easily, I'm going to jot it down here so it's more present on the web for others (and myself!) to quickly find.

Suppose you want to test something like a benchmark; for example, a unit test that has to process a largish file. You can use the dd command which is available on macOS and most Linuxes.

It creates a binary file so you can't cat view it. But if you try to use less, for example, you'll see this: